We value the time-honored Baptist tradition of defending religious liberty for all persons.  The freedom to believe and to worship (or not) as you see fit, without coercion, is a fundamental human right.  Neither the State nor the Church profit when they interfere with one another.  We are strong supporters of the Baptist Joint Committee for Religious Liberty, an organization with which our church has long-standing connections, and the only religious agency devoted solely to religious liberty and the institutional separation of church and state.  Read on to learn more about the history of Baptists and religious liberty. 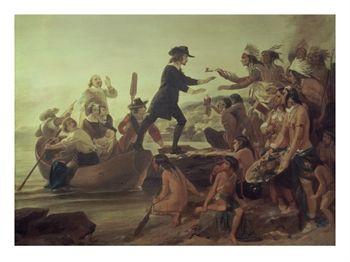 From the time Roger Williams established a settlement in Rhode Island where religious liberty reigned, Baptists have labored to maintain religion’s vitality by keeping it free from government. It is perhaps the greatest gift that Baptists have given to civilization–an unwavering commitment to the twin guarantees of the First Amendment that government will neither advance nor inhibit religion.

Baptists became champions of religious liberty and church-state separation in large measure because we honor the Bible and because we have suffered the hard lessons of history. For many Baptists, religious liberty is well grounded in the pages of Scripture. Its taproot can be found in the creation accounts in Genesis. The creation of human beings in God’s own image necessarily implies a freedom on our part to say yes or no–to choose for or against a relationship with God, voluntarily and without coercion.

Also, early Baptists experienced firsthand the pain of persecution–the heartache and bloodshed occasioned by religious zealots armed with the coercive power of the state.  From jail cells in England to stockades in Massachusetts Bay to whipping posts in Virginia, the litany of Baptist heroes of the faith includes Thomas Helwys (1550-1615), Roger Williams (1603-1689), Obadiah Holmes (1607-1682), Henry Dunster (1609-1659), John Leland (1754-1841), and Isaac Backus (1724-1806).

Religious liberty is often called our “first freedom,” not only because it was ensured first in the Bill of Rights, but also because of a widespread conviction that religious liberty is nothing less than a gift from God. Both religion clauses of the First Amendment were inserted to protect that liberty, but in different ways. The Establishment Clause keeps government from advancing or privileging any religion or religion in general and from violating the consciences of those who believe differently or have no religious belief. The second clause, the Free Exercise Clause, keeps government from interfering with religious practice unless government can assert convincingly some paramount interest, such as peace, safety, or public health and welfare.

(We gratefully acknowledge the assistance of Jeff Huett of the Baptist Joint Committee in drafting this history of Baptists and religious liberty.)